“Swordfish/ (Whale) Song” – Music: These sacred songs have been passed down by Ojai’s Native Chief, the Honorable Vincent Tumamait, direct lineal descendant of the “Island People” from Mashchal, Santa Cruz Island, (also known as Orizaba). It gives me extreme honor to preserve and steward these sacred songs.

The All Gain Song: 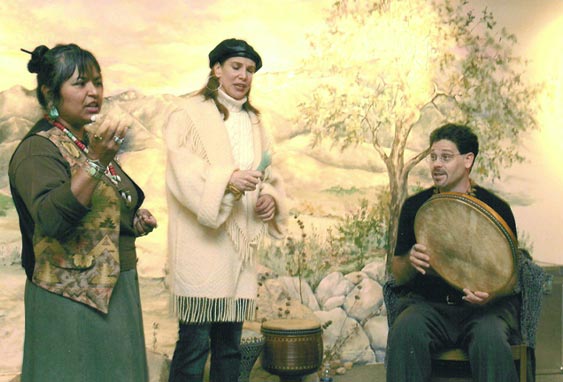 The Honorable Vincent Tumamait was the son of a full-blooded Chumash father and half-blood Chumash mother. His parents came from Santa Cruz and Santa Rosa Island. His Grandfather’s name was Juan de Jesus Tumamait. The youngest of nine children, born July 19, 1919, Vincent grew up in Ventura and attended school at the San Buenaventura Mission.

He married Lucy Castro in 1930 and had seven children.  They moved to the Ojai Valley in the early 50’s and lived in Meiners Oaks in an area known as the “The River Bottom.”  This is the same river where Vincent’s Great Grandmother, Maria Ricarda Alulamegue, once lived and played.

An accomplished storyteller and singer, Vincent became the Elder and Chief, Wot, of the Ojai Valley.  The Honorable Tumamait was part of the Painted Cave Choir, which traveled around the country sharing knowledge of the Chumash people as well as other California tribes. He passed at the age of 73, August 11, 1992 in Ojai.