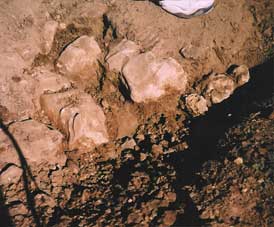 i Jan 5th w No Comments x by ovws staff

Ethnomusicologist Aaron Plunkett has been seen around Ojai showing music students how to keep rhythms on a drum. In his spare time, he turns in his drumsticks for a fishing rod and earlier this year, the result was historic.

Plunkett was at Lake Casitas fishing Jan. 19 and playing his Irish “bones” to attract fish when he came across some whale bones that have been confirmed to date back 25 million years. “You can imagine my delight at discovering such an important pile of bones,” said Plunkett, a new Ojai resident. The fossil Plunkett discovered has been identified by the marine mammal lab at the Natural History Museum in Los Angeles as a 25-million-year-old toothed baleen whale.

“It was a nice site and the fossil has been collected,” said Hal Thomas, senior paleontologist preparator for the museum. Other fossils at the site have been collected also, he added. Thomas explained that the great whales – blues and humpbacks among them – are baleen whales. He also explained that the killer whale, dolphins and sperm whales are toothed whales. “The whale Aaron found is a toothed baleen whale. We have the ear bone that tells us it’s a baleen and the jaw which is toothed. This is probably the last toothed baleen whale that ever lived,” said Thomas. He based his comment on the fact that the whale’s existence 25 million years ago was at the earliest part of the Miocene Period. The toothed baleen whale was thought to be extinct in the Oligocene Period, the period before the Miocene Period. “It is also extremely significant that it is the only toothed baleen ever to be found in California. They have been found in Washington and Oregon and on the Baja, but nobody’s seen one in California before this,” said Thomas.

He said the site also included some dolphins and other animals and their recovery is a significant find. Plunkett fishes at Lake Casitas, said Thomas. “He stuck his fishing pole into the mud and put rocks around the pole to support it. One of those rocks was a vertebrae. He knew he had something and brought it to us. We took one look at that jaw fragment, took out a crew and found a 50-foot whale. We found the skull, or part of it, and found the tail part and it was spread out 50 feet long,” said Thomas.

Plunkett said he wants to remain involved in the project and wants to find the funding to establish a facility at Lake Casitas that would be an interpretive center and include documentation of the find. The actual fossil will remain in Los Angeles, said Thomas. If a center were created, however, he said a casting of the fossil would be made and recreated at the center. “Most likely a cast of the species would end up in the interpretive center with any missing parts in a different color,” said Thomas, adding, “it would make a nice little display. The pieces are too important scientifically, however, to actually be put at the center. That would be unheard of, considering the uniqueness of the find and the research that will be done.”

“Because the find is so recent I do not have a concrete concept or presentation of the eventual outcome,” said Plunkett. “There are many options. There are many aspects to consider.” Plunkett also said he had hoped the whale would remain in the Ojai Valley. “A museum, I feel, is only a portion of what this project could be,” said Plunkett. “The final phase would develop the possibilities and potential for community enrichment through paleontological, anthropological and cultural preservation into a multidimensional center, embracing facilities for instruction, public performances, history through storytelling, promotion of anthropological art forms and the like. I want to be involved at all levels on this project.”

Casitas Municipal Water District General Manager John Johnson said he would be happy to see such a center at the lake; however, recently environmentalists have been up in arms that the district has been creating water-play areas without new plans. “We are under the scrutiny of that kind of thing. (An interpretive center) is not in our long-term plan. Local environmentalists are saying anything like that is inappropriate,” said Johnson. Such expansion could result in the need for an environmental impact review.

Anyone wishing to donate to the project may contact Plunkett at Plunkett Productions and the Ojai Whale Society at (818) 569-5465.