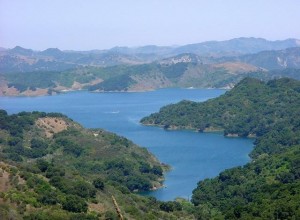 i Jan 6th w No Comments x by ovws staff

Scientists might excavate the remains of a fossilized 25 million-year-old whale at Lake Casitas as they continue to study a discovery that they say is significant in tracing the evolutionary path of the toothed baleen whale.

Aaron Plunkett of Oak View made the discovery in January. Thinking he’d found something important, he contacted the Natural History Museum in Los Angeles and brought in pieces of the 25-foot-long whale skeleton. It was found in an undisclosed dry area at the lake on federal land.

Plunkett’s instincts were on target. “We said, ‘Hey that’s a primitive whale,’ ” said Howell Thomas, a paleontologist with the museum who specializes in marine mammals. He said Plunkett had discovered the only baleen whale tooth to be found in California. Others from the same time period have been found in Oregon, Washington and Baja California, and scientists had been eager to see what would turn up in California.

The tooth from the fossilized whale Plunkett found is different from other teeth of ancient baleen whales from the time period, Thomas said, leading to the possibility that the Lake Casitas whale fossil represents a newly discovered species, genus or family, Thomas said. The whale skeleton Plunkett found is likely a representative of whales from the time, which were in the process of losing their teeth.

Adding to the excitement of the whale find is the fact that a few vertebrae of other baleen whales from the same time period were found nearby, as well as a “brittle star,” a creature related to the starfish from the same period, Thomas said. Whales are about 50 million years old.

He said it would take two to four days for scientists to dig out all the rest of the fossil skeleton, a move the museum is considering. The museum already has the skull and a few vertebrae. If a scientific excavation is undertaken and enough pieces of the fossilized whale skeleton come out in good condition, the skeleton could be put on display at the museum, Thomas said.

It’s too early to tell if Plunkett’s desire for his find to be displayed in the Ojai area will be realized. Plunkett could not be reached Friday.

At Lake Casitas, meanwhile, Doug Ralph, the director of the Lake Casitas Recreation Area, said the exact location of the fossil find will be kept quiet to prevent others from disturbing the area or taking any bones.

“The bones belong to the federal government and the people of the United States of America,” he said.