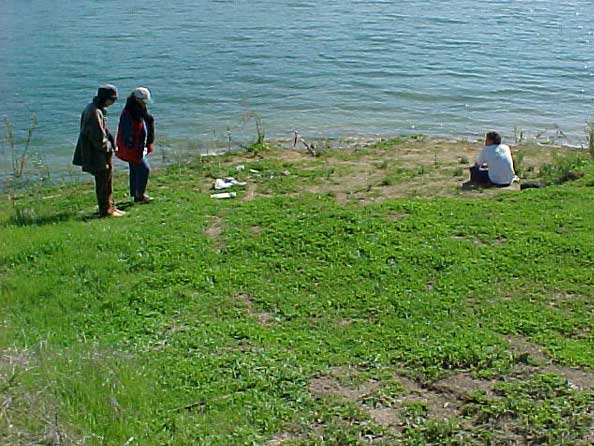 i Apr 6th w No Comments x by ovws staff

During the course of the next 12 months, the Ojai Valley Whale Society established their organization and goals (please see Mission Statement and C3 non-profit status), and geared their concerns to preserving this extremely significant paleontological discovery as well as nearby and surrounding fossil-rich area and the local Native Chumash history and culture.

During the course of these same 12 months, the LANHM (Los Angeles Natural History Museum) scheduled, rescheduled and canceled four(4) separate exhumations to retrieve the remaining 80% of “Wendell the Whale”. The positive waves of excitement and anticipation coming from the staff at the Ojai Valley Whale Society, the Ojai Municipal Water District, and friends and family of devoted diggers who looked forward to each of the four scheduled exhumations by the LANHM, gently turned to subtle speculation and waves of concern when they saw tire tracks cutting California’s first fossilized, 25 million year old toothed baleen whale in two: 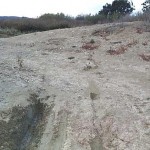 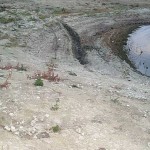 Four wheel drive out for a joy ride #1

Tire tracks continue to cut California’s first fossilized, 25 million year old toothed baleen whale in three (maybe four and please, no more). Note mini-van in background and as well, the previous tire tracks, from the above “4 wheeler”, are visible in the left hand side of the first two photos below: 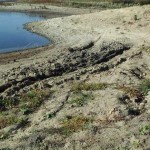 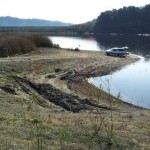 Four wheel drive out for another joy ride #2

The Ojai Valley Whale Society sent copies of some of these photos to the LANHM and other proper authorities, expressing its concern over the fossils and the need to preserve these national treasures before they become decimated.

There was not a motion or word heard from the LANHM, the owner of California’s first fossilized, 25 million year old toothed baleen whale. The Ojai Municipal Water District donored the whale to the LANHM and remains in control and responsible for this fossil. Unfortunately, there was no response from the LANHM.

Despite these obvious set backs, the OVWS remained positive, however the reckless behavior carried out by the drivers of these vehicles would not have inflicted its wrath on these precious fossils if the proper authorities had (LANHM) exhumed California’s first fossilized, 25 million year old toothed baleen whale as scheduled initially, and subsequently rescheduled and canceled three (3) times after that.

Ojai Municipal Water District’s grounds keepers created a moat surrounding the nearby area in hopes of deterring other four wheel drive vehicles from access to and future deterioration of the fossils: 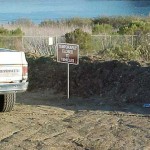 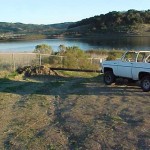 Mother Nature also got involved and saved the day by covering “Louie and Wendell the Whales” with rain water from a single 36 hr. storm (Halleluyah): 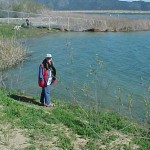 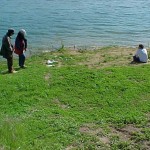 The following time allowed for personal exchanges. Sue Hendrickson and I exchanged a few “Bones”: 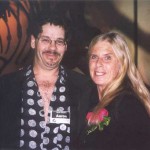 Her dog Skywalker liked them too(not present in picture)! However, he showed his appreciation by trying to cart off a pair of bones for a little dinner dining. 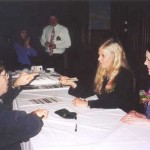 Pictured from L to R at the LANHM's "The Fellows" banquet, hosting Sue Hendrickson, is Aaron Plunkett, John Ireland in background, Sue Hendrickson and Sarah Lawall 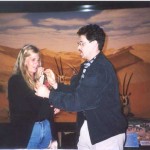 Sue and I exchanged how to play the oldest musical instrument in the world - 2.5 million years old - the ancient Celtic Irish Bones -actual ribs from a goat

There is quite possibly nothing like a personal exchange other than with Mother Nature:

12 1/2 Lb. Large Mouth Bass (“hog”) about to devour Aaron Plunkett’s head and hand on June 12, 2002 at Lake Casitas. Caught on live shad in 4 ft. of water on 8lb. test at 11:00 am off the pier. Angling time 21 Min. – Catch and Release! This monster bass was actually caught while under an immediate challenge from fellow fisherman, Robert Hiyaker who didn’t believe that Aaron had just caught a 10 1/2 pounder the previous day off the shoreline at the site of Louie and Wendell the Whales. Mr. Hiyaker’s exact words were, “Oh Yeh, I’d like to see you land something like that right now”…. At that exact same second Aaron’s pole completely bent over while the line went screaming out like a rocket-strike! The rest is history.

Continue to Section III for an article from past to present written by Chris Wilson.